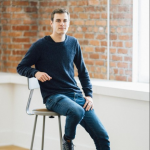 Alexandre holds a master’s degree in industrial design from Strate and has been working as a designer for 6 years. He worked in England for Orange UK, created a startup in San Francisco in 2016. He returned to France and worked on industrial projects for Safran, Weber and SIAAP. He also works on IT security projects before joining WeDigitalGarden in 2018 where he works for digital factory for Sodexo and Air liquide.